Why do they speak Portuguese in Brazil instead of Spanish like the rest of South America?

I have always wondered this but never thought to ask. So today I did just that, I asked.

It is because of the Line of Demarcation. The Line of Demarcation was a line drawn along a meridian in the Atlantic Ocean as part of the Treaty of Tordesillas in 1494 to divide new lands claimed by Portugal from those of Spain. This line was drawn after Christopher Columbus returned from his maiden voyage to the Americas. 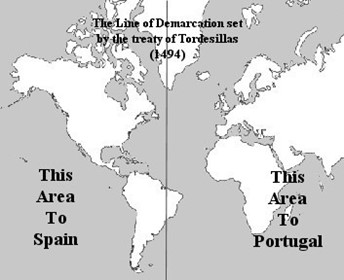 I’ll let you guess where Brazil is. We also had a line of demarcation in the USA, the Mason-Dixon Line.

A good definition is: A line defining the boundary of a buffer zone or area of limitation. A line of demarcation may also be used to define the forward limits of disputing or belligerent forces after each phase of disengagement or withdrawal has been completed.

Why all of this you ask? Well, nearly a month ago my sighted daughter called to tell me the Savior had showed her that the demons and devils were now allowed to go after us mortals at a new level. They are now allowed to do things to us that they weren’t allowed to do before. That was what she said with no other explanation.

I knew from what my sighted friend had told me a while ago that the cause of it might be the first two levels of hell are now upon the earth. The people on the earth have now become dark enough that the first two levels of hell can now exist here without any problems. Remember, the Lord has said more than a few times that His Spirit will not always strive with man. Look it up. Now we are experiencing the consequences of that having happened.

I asked my sighted friend several days ago to give me an example of what my sighted daughter had said. She explained it was like the line of demarcation had been moved. There are rules of engagement that demons and devils have to obey.

We have discussed this before where in Section 129 of the D&C it is explaining about identifying beings from heaven and hell. In verses 6 on it states: “If he be the spirit of a just man made perfect he will come in his glory; for that is the only way he can appear – Ask him to shake hands with you, but he will not move, because it is contrary to the order of heaven for a just man to deceive; but he will still deliver his message. If it be the devil as an angel of light, when you ask him to shake hands he will offer you his hand, and you will not feel anything; you many therefore detect him.”

This section of the D&C discusses the “three grand keys” of detecting spirits or beings. It comes from the “order of heaven.” So how come a devil won’t just do as the just man made perfect and not move? Because there are rules of engagement and if he did so he would receive consequences he doesn’t want.

The line of demarcation was one of the rules of engagement. We mortals on this planet have become so dark the Savior moved that line of demarcation of what the demons and devils could do to us. They are now allowed to do greater things and have greater influence over us than before. This is the consequences of our behavior, and natural law.

We have stated over and over this is a war being waged here. As evil grows things change, like what the evil entities are allowed to do. We showed you in a previous post the minority leader in the United States Senate and the evil entity he asked to move out of his chair. Go back and watch the Senator as he sits in his chair after the entity moved out. You will see the “shimmering” near his left and right arms. Those are two of the evil entities that are on him. My sighted friend saw them all over the room on many people there.

This country is ruled by evil. Once the current President is gone, you will see evil explode. Life as you have known it is already over as this evil man-made virus spreads. Others are coming. It is over because the line of demarcation has been moved. I’m sure with the hold evil has it will be moved again and again. You do understand that these globalist hate you. You love life and God, two things they despise and are wanting to destroy. They love death.

Our ONLY hope is Him, our Lord and Savior Jesus Christ. I don’t know how to say it any better. Alma wanted a trump to shake the earth. (There is a really good pun there, but I won’t.) If you connect to men or a man, you will perish. Your only hope is connecting to Him and none else.

You do realize that the reason the adversary will be bound during the millennium is because those left on the earth will look to Him only and pay no heed to evil. Will that allow the Savior to move that line of demarcation the opposite direction? Interesting question, isn’t it.

All praise, honor and glory be given to Him:

“For he shall grow up before him as a tender plant, and as a root out of a dry ground: he hath no form or comeliness; and when we shall see him, there is no beauty that we should desire him. He is despised and rejected of men; a man of sorrows, and acquainted with grief: and we hid as it were our faces from him; he was despised, and we esteemed him not. Surely he hath borne our griefs, and carried our sorrows: yet we did esteem him stricken, smitten of God and afflicted. But he was wounded for our transgressions, he was bruised for our iniquities: the chastisement of our peace was upon him; and with his stripes we are healed. All we like sheep have gone astray; we have turned every one to his own way; and the Lord hath laid on him the iniquity of us all. He was oppressed, and he was afflicted, yet he opened not his mouth; he is brought as a lamb to the slaughter, and as a sheep before her shearers is dumb, so he openeth not his mouth.” (Isaiah 53:3-7)

With His stripes we are healed. Thank you Lord God for that opportunity and blessing.

And as in all things, please pray and ask our Father about this, don’t believe the writer of this blog. A personal witness from Him is a must or you are believing in flesh and are therefore cursed. Those tendrils are real.

← Birth of a Democrat
Temple recommend →